“Don’t put all your eggs in one basket.”

It’s a familiar saying, and believe it or not, that age-old piece of wisdom is used by electric utilities to make sure you receive a reliable supply of electricity.

“You don’t want to be too reliant on any one energy source,” says Leitman. “The goal is if one resource becomes constrained, others are there to fill the gap and keep the lights on––it’s about managing risk and priorities.”

But these days, there are a lot more options—the variety of electricity generation is higher than it’s ever been, and not just because of more renewable energy sources like wind and solar. Batteries are getting cheaper and powerful enough to supplement wind turbines during calm weather, and solar when the sun’s not shining. Energy load-control programs can shut off water heaters for short periods during times when electricity use is highest. Rapid technological advances across the power industry have also been key for unprecedented opportunities, allowing utilities to manage the electric power systems in ways that make energy resources more useful.

While a broader mix of fuels could potentially bring even greater reliability to your electric service, coordinating all the new and old equipment of the nation’s electric grid requires new skills and careful management.

For years, the electric utility industry’s main fuel source has been coal. Coal traditionally provided about half the electricity in the country because it was reliable, plentiful and relatively inexpensive. That backbone was supplemented by nuclear power, hydroelectric power and natural gas.

But that’s changed radically over the last 15 years.

The supply and price of natural gas fell dramatically with fracking and other drilling technologies. Natural gas plants offer other advantages—they can be built smaller, faster and cheaper than coal stations, and they can be controlled more quickly as power demand changes from day to day. Coal costs rose with environmental regulations, and renewable energy sources received more attention because of their benefits to the environment.

As a result, by 2016, natural gas replaced coal as the largest source of electricity. In 2019, natural gas made up 38% of the electric utility fuel mix; coal, 23%; nuclear, 20%; and hydroelectric power, 7%. The non-hydro renewable energy share of electricity production has risen from almost nothing 10 years ago, to 7% for wind and 2% for solar—and both continue to increase rapidly.

One is that renewable energy doesn’t act like the more traditional power plants. A coal plant can run all the time, while wind and solar shut on and off as Mother Nature makes changes every hour––meaning the wind doesn’t always blow, and the sun doesn’t always shine. But with the second revolutionary change—the smart grid—the use of these complex renewable energy sources can be managed better. 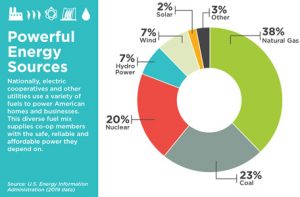 The digital transformation began more than two decades ago, and disruptive forces have had an impact on the power sector ever since. Electric utility dreamers foresaw a shift from an analog network of levers and switches to a digital system that includes automated power management and new ways to manage the flow of electricity.

That smart grid has arrived. Power outages can be detected more quickly, and you can even track the repair process on your smartphone. Digital software can more effectively manage the output of rooftop solar panels, sending electricity back to the utility when the homeowner isn’t using all the electricity they produce. The smart grid can also make solar and wind energy more useful through the use of batteries. It’s a lot of technology that helps ensure you receive uninterrupted, reliable service.

Managing the smart grid brings improvements, as well as requirements for new ways of doing business.

“The smart grid brings new opportunities to increase reliability and resiliency, but it has to be more actively managed,” says Leitman. “You’ve still got to have folks that know how to climb utility poles, and now we need those who also understand programming and working with computers and control systems.”

The need for that new expertise will benefit electric cooperatives and their consumer-members well beyond more reliable electricity. New skill sets will be needed, and that will create additional job opportunities in the local communities served by electric co-ops.