As the economy continues to recover from the COVID-19 pandemic, the energy sector is still experiencing lingering impacts to fuel markets and sources for power generation. In the coming years, however, it is expected that the industry will normalize back to recent trends and the pre-pandemic trajectory. 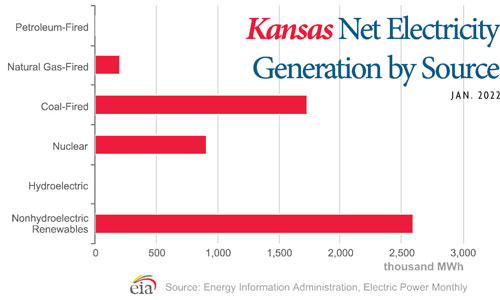 At the height of the pandemic, in 2020, national retail electricity sales declined by 2.5%, accompanied by a shift in demand patterns and in generation mix. As people spent more time at home due to social distancing measures, U.S. residential sales rose by 1.7% while commercial and industrial sales fell by 5.4% and 4.3%, respectively. With demand for natural gas declining, generators took advantage of low fuel prices and the share of power coming from gas-fired resources increased for the third straight year, while the share from coal continued to decline.

In 2021, the economy started to reopen, and demand recovered, but natural gas production was slow to ramp up, leading to increased fuel prices. As a result, the share of U.S. electricity powered by natural gas fell in 2021, for the first time since 2017. This drop was offset by an increase in coal-fired generation, bucking a multi-year trend that saw the use of coal for electricity declining every year since 2014. Though natural gas remains the dominant fuel source in the U.S., the share from non-hydro renewables, primarily wind and solar, has steadily increased for the last several years.

In 2020, wind energy accounted for 43% of Kansas’ electricity net generation, which was the second-highest share of wind power for any state after Iowa.

Going forward, the U.S. Energy Information Administration (EIA) projects that the share of coal and natural gas in the electric generation mix will decline as the rapid growth of non-hydro renewables, especially solar, continues. According to EIA’s projections, renewable energy sources will surpass natural gas as the largest source for generation by 2030.

Nevertheless, natural gas is expected to remain an important fuel source for electric power, due to its abundant supply. Perhaps more importantly, gas-fired units can respond more easily to changes in system conditions, which is crucial for maintaining reliability of the electric grid, as the fuel mix transitions to higher penetrations of wind and solar resources that do not run all the time. Batteries, which have become cheaper and more powerful in recent years, will also play an important role in supporting renewable resources.

In recent years, severe weather events have highlighted the need for fuel diversity in maintaining system resiliency. That is, if one source of power is constrained during a storm, having others available to fill the gap can provide stability and keep the lights on. But as the generation mix shifts away from conventional fuels, additional changes will be necessary to accommodate the upcoming changes and ensure both resiliency and reliability. Modernizing the national grid with new technologies can offer a variety of solutions during the energy transition. The use of advanced data, two-way communications and digital software enable better and more efficient management of the electric system. Although traditional, hands-on roles are still crucial for electric operations, there will be a need for new expertise to integrate and use these new technologies across the entire energy industry.

Through the evolution of the power generation mix and the electric sector in general over the next several years, there will be a number of challenges and opportunities for electric cooperatives as they continue to provide safe, reliable and affordable power to the local communities they serve.