The COVID-19 pandemic has changed many things in the course of the 2020 school year, but it hasn’t stopped Tabatha Rosproy, preschool teacher from Winfield, Kansas, from inspiring her students and those around her. After all, she was named the 2020 National Teacher of the Year for the passion she brings to her vocation, which is palpable even during a “virtual” interview.

Rosproy won the award not just for her devotion to teaching young minds and her dedication to her students, but for her work with the intergenerational program, officially known as the Winfield Early Learning Center, (WELC) she helped develop.

Little Vikes, as it is known at the Cumbernauld Village in Winfield, is a social-emotional and intergenerational program started two years ago where resident volunteers of the retirement community work and play with the children. It was the first public preschool to be housed inside of a retirement community in Kansas and modeled off a similar kindergarten class in Coffeyville, Kansas.

Rosproy, who has a bachelor’s degree in early childhood education from the nearby Southwestern College and taught undergraduate classes in the college’s educational division, has been teaching overall for 10 years, two of those with the intergenerational program.

“Both the preschoolers and the elderly in our community are two populations that have always held big places in my heart,” Rosproy said.

Building Social Capital in the Community

This classroom concept was promoted by the Early Childhood Readiness Coalition of which Rosproy is a member. She wanted to start the program after the community recognized the need for a full-day preschool but needed the space to make it happen.

“For me, it really was building social capital in our community and I’m always looking for ways to connect my students to the community that we are in,” Rosproy said.

Rosproy and those involved in the concept development initially contemplated how they could capitalize on available resources and how the students could benefit from those resources, while also giving back to the community.

Since many of the educational buildings/schools are older and not as functional for modern-day teaching,

Rosproy said if it were not for the partnership with Cumbernauld Village the incredible opportunity of the program would not have been possible. The classroom was built and paid for by Cumbernauld while WELC and Rosproy supplied classroom materials. WELC also received a grant to build the playground.

“It was a two-year process to get it going,” Rosproy said. “It was never one that felt like a chore. Everyone was so excited and just so thrilled to get it going so everyone sort of bent over backward to make sure that it happened.”

Rosproy and several early childhood educators collaborated with the architect on design factors such as the height of the furniture and shelves and other considerations important to the safety of the resident volunteers and students.

“So the teacher’s voice was really elevated in this process and that has been missing from the design of a lot of our schools,” Rosproy said.

Building Relationships Beyond the Classroom 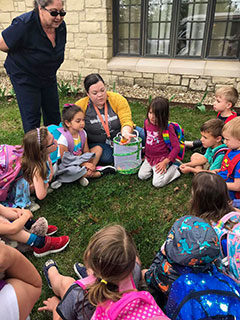 The children in the program have benefited academically and socially. Rosproy said her students at the end of last year were on grade level or above with their phonemic awareness (individual sounds in a spoken language), which she said is a first in her decade of teaching.

“We don’t just have benefits academically, but we also have a class that has more empathy and kindness and the ability to build relationships with people, unlike any other class I’ve ever had,” Rosproy said. “Just their respect and their treatment of people with differing abilities are way beyond their years.”

The relationships between the residents and the preschoolers go beyond the classroom as Rosproy said she hears the children tell stories of “Grandpa Jess or Grandpa Clyde” out in the community at church or even the grocery store.

“We all know that kids need support when they become an adult,” Rosproy said. “I had some incredible, positive adults in my life, but not every kid has that.”

Rosproy said this relationship-building gives the children another person to count on and provide support during life’s milestones like graduations, team sporting events and when the children need advice or help learning a skill their parents may not have.

“I think that every kid deserves champions of all sorts and these grandmas and grandpas — what we call them at Cumbernauld Village — are really an extension of that family for my students,” Rosproy said. “And the relationships have continued in the last two years and it is something that is really strong.”

Ed Foster, a resident at Cumbernauld and volunteer for the Little Vikes program is grateful for the program’s positive impact on everyone at the retirement home. He taught for over 40 years, from kindergarten classes to college curriculum, spending the last 24 years as a professor emeritus at Southwestern College in Winfield. Foster’s volunteer duties include reading to the kids once a week and telling them stories of his colorful past.

In one of his storytelling sessions, Foster brought in a photo of a World War II battleship he served on at age 17, which had been bombed in Pearl Harbor. Foster laughed while recalling a time when he asked the students what they thought of the photo. One boy replied, “Grandpa Ed, were you killed in the war?”

Foster said the special relationships with the children are what he cherishes most.

“I’ll always remember the children when they would want to sit on your lap and were always very loving,” Foster said. “Some of us didn’t get to see our grandchildren grow up so we really appreciate it and it’s something I’ll never forget.”

Rosproy said everyone involved with the program, including her students, enjoy learning the history and stories of the volunteers, like Grandpa Ed.

“It’s just like this untapped resource and these stories that might have never been heard again,” Rosproy said. “There’s new life being breathed in with my students, which is so magical.”

Parents have watched their children grow personally as a result of the intergenerational classroom. McKinzie Tucker described her son, Knox, as “a whole different kid” as a result of the program. She said he’s transformed from a quiet and sometimes anxious child to being outgoing and having a lot of respect for the elderly people around him.

“Kids don’t learn if they don’t feel safe in their environment,” Tucker said. “And they [the residents]always made them feel safe and loved.”

Parents interested in enrolling their children in the program, enter a 16-place “lottery” in which the participants are selected at random. Knox, an original participant of the program, keeps in touch with the Cumbernauld grandmas and grandpas, still visiting from time to time to play bingo, go fishing and to chat.

Rosproy’s favorite memories in the short time the program has been in existence are many, but one in particular, she holds close. She described a student who was struggling to learn how to count and one of the grandma volunteers took notice. The grandma asked Rosproy if she could help the student during her free time while the other students were completing activities with Rosproy. The grandma brought in a huge purse filled with pennies and counted them with the student for five to 10 minutes a day.

“I just saw an incredible amount of growth in that little girl because someone was able to provide focused attention, and there are countless stories like that,” Rosproy said. “Just the evidence of what one-on-one interaction can do for a child.”

Becoming National Teacher of the Year

“I really thought they were confused or that they were calling to tell me something different,” Rosproy said.

As a national finalist, Rosproy flew to Washington, D.C., where she met the other three finalists at the Council of Chief State School Officers (CCSSO). Rosproy prepared and presented a keynote speech in front of representatives from 17 different U.S.-based educational organizations. Finalists also completed mock and real press interviews, and rotating interviews with each other.

Rosproy did not expect to learn the results immediately, but at the end of February she received a call saying she had been selected for the national honor.

“I was shocked and I was by myself when I found out the news,” Rosproy said. “I really couldn’t believe it because there are so many incredible educators in Kansas and all over the country and I was just humbled and excited to represent them.”

Since winning the award, Rosproy has taken a break from her regular teaching duties to travel and speak with others about the program and pursue relationship-building through her position as National Teacher of the Year. While traveling mostly virtually, Rosproy estimates she will complete around 150 speaking engagements with groups across the country.

“I’ll get to talk about what’s important to me and my platforms as National Teacher of the Year and I’ll also get to do some advocacy work on behalf of teachers and on behalf of students,” Rosproy said.

Despite the pandemic affecting many of Rosproy’s duties as a teacher and as National Teacher of the Year, she believes right now the teacher’s voice is more important than ever.

“We need an advocate for what kids and teachers need,” Rosproy said. “And I think I am the right person for that job.”

The Little Vikes program has temporarily moved from Cumbernauld Village until fall 2021 to ensure the safety of the preschoolers and the retirement home residents. KCL