Bringing the Internet to Everyone

The United States has quietly launched one of its biggest programs ever — connecting everyone to the internet, even those of us in rural areas.

The program’s scope and economic benefits will match the impossible dreams of huge hydroelectric dams built in the 1930s, the interstate highway system in the 1950s and putting people on the moon in the 1960s.

It will be expensive. By one measure, the Federal Communications Commission (FCC) estimates a cost of $40 billion. A more ambitious plan would be an additional $40 billion.

“We’re on the cusp of some big changes,” says Brian O’Hara, senior director of regulatory issues, broadband and telecommunications, for the National Rural Electric Cooperative Association. 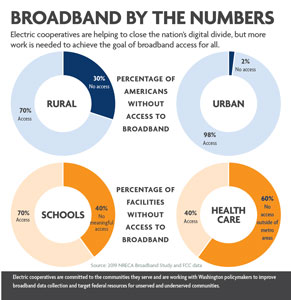 The Importance of Broadband for All

Currently, more than 20 million Americans do not have broadband in their homes or businesses. Many of those people live in rural areas and are left out because of simple accounting — the cost of wiring a fast internet connection miles outside a city is more than almost anyone could afford.

That arithmetic is not changing. But decades of internet growth is convincing businesses, politicians and other policymakers that broadband is an essential part of modern life and today’s economy.

A study by Purdue University found that every dollar invested in broadband would return nearly $4 to the U.S. economy. The benefits include more civic engagement and a higher gross domestic product (GDP). The study also said broadband is more important than traditional infrastructure such as railroads and highways.

Broadband access for rural America brings new challenges as intricate as the engineering of the interstate highways or the technology required when we landed on the moon. One of those challenges is knowing where the people are who don’t have internet access — and exactly how many of them there are. The official count of those without broadband is complicated by oddities such as voluntary reporting, reporting by census blocks (meaning if one person has broadband in an area, it counts as everyone having it) and uncertainty over how fast the internet has to be in order to be considered high-speed.

Because of those uncertainties and unknowns, estimates of the number of Americans without broadband can actually range somewhere between 21 million and 160 million.

Then there’s the cost. The FCC’s $40 billion cost estimate envisions bringing broadband to 98% of the country. And another $40 billion to reach the final 2%.

Rural broadband advocates agree that the first step is to gain better information on who’s not served and where they live. A step in that direction came in March 2020 with enactment of the Broadband Deployment Accuracy and Technological Availability Act. That new law aims to fix the flaws in how access is counted.

The Pandemic Shows the Need for High-Speed Internet

Another reason for hope came last year as the FCC launched a 10-year program called the Rural Digital Opportunity Fund. Under that program, $16 billion has been allocated to internet providers, including some rural electric cooperative groups, to begin work next year expanding the reach of the internet. An additional $4.4 billion is planned for a Phase II.

While that’s far from the FCC’s $40-80 billion cost estimate, it doesn’t count funding from other agencies like the Rural Utilities Service or actions by individual states. The National Conference of State Legislatures reports that in 2020, 42 states addressed broadband in some form. Many states offer their own financial aid, as well as offices to coordinate broadband expansion. Kansas Governor Laura Kelly signed an executive order in October 2020 to establish the Office of Broadband Development and announced the distribution of nearly $50 million in Connectivity Emergency Response Grant funds to underserved Kansas communities.

“Broadband access has been an overlooked problem in Kansas and across the country for years, particularly in our rural and vulnerable communities,” Gov. Kelly said.

O’Hara expects all that progress will be strengthened by this year’s COVID-19 outbreak and the stay-at-home measures taken to control the spread of the virus.

“The pandemic has really driven this home,” said O’Hara. “Overnight, we went from broadband being, ‘Oh yes, this really makes life a lot easier,’ to ‘Oh my gosh, schools are shut down and teachers are trying to do online learning, and those of us that could work from home are no longer going into the office.’”

O’Hara sees the progress toward rural broadband as leading to successes like the moon landing and interstate highway system, as well as another important national initiative we undertook years ago — bringing electricity to rural America.