Dip My Hand in Shortening and Call Me Knead-y 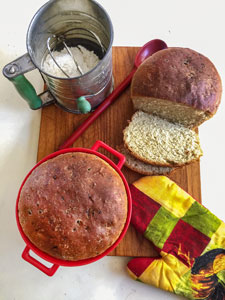 My mom’s cookie sheets — the ones on which I learned to bake — could have been used on a movie set to create the notes of distant thunder. They were HUGE, heavy and somewhat floppy. They were also not nonstick. You had to grease them, and not with cooking spray, but a dip of your hand into a vat of thick, white, waxy shortening. You rarely see a single recipe later than the 1980s where you grease cookie sheets. With the advent of nonstick sheets and pans, and the proliferation of parchment paper or silicone pads to line them, greasing baking sheets became an instruction shelved in the past.

It’s one of a number of baking practices that have changed since I, a child mainly of the 1970s, declared at age 3 that I wanted to be a “bakery.” A lifelong baker and self-proclaimed “baking geek,” I’ve kept notes on other ways that have evolved since I first learned to bake.

That ever-ready can of shortening that kept cookies from sticking to sheets and added the flake factor to pies also diminished in its fat domination in the kitchen. We used to make all of our cookies, cakes and other baked goods calling for solid fats with shortening or a widely available stick margarine called oleo. Then, butter, at one time a rarity of expense looked upon as less healthy than manufactured fats — took over. And I would imagine cooking spray is now on shelves where shortening used to be.

Sifting Through the Past

I can still feel my mom’s old sifter in my child hand, the handle, a loop of heavy wire that ran down to a second loop inside that shoved the flour back and forth over a screen at the bottom, sending a lighter, finer powder into the bowl. I was captivated, confused and a little irritated with sifting (did you really need to sift the flour first and then measure it and sift again with leavenings, etc.?). Back then, it seemed required for every baked good recipe. But sifting and sifters, for the most part, went away. With flours becoming more refined and other ingredients improved to be clump- and debris-free, one can take a simple whisk to a bowl to break up, lighten and blend any dry ingredients. If sifting is needed nowadays, the dry ingredients can be sent through a fine-mesh strainer simply tapped against one’s hand.

Have Your Cake Yeast

The only yeast we used for bread-making was a moist, taupe-colored block sold in a foil package in the refrigerated section of the grocery store. The odiferous creature (it was potent enough to curl your nose hairs) had to be kept chilled and was crumbled and broken down in warm water to dissolve for baking. It made beautiful bread. But cake yeast’s previous prevalence in the grocery stores dwindled (one theory is this was due to its short shelf-life) to nearly nil (you can still find it sometimes), and the yeast we commonly use now has, literally, dried up.

Speaking of bread-making, it used to be that hand-kneading was not optional for most yeast bread recipes. Occasionally, a no-knead option would offer a chance to take a needed kneading break, but most longtime bread bakers were expected to work some muscle and even sweat to get the dough in shape. These days, no-knead bread recipes abound, and everything from bread machines to mixer dough hooks get any required kneading job done. But novice and experienced bakers should not pass up the chance to get their hands in there for this time-worn, tactile process bringing a loaf to life.

I don’t even know how many ways of motorized mixing currently exist, but I do know that there are at least three steps to assembling my food processor; I must strength-train to haul out my large stand mixer, and there is a likelihood I won’t find matching beaters for my handheld mixer. Is this really easier than just using a wooden spoon? I recently made some bread (see recipe on Page 16), that, as I began to excavate for my appliances, I discovered the recipe needed no more implements than bowls and spoons. How refreshing that these recipes still exist, a testament that good ol’ elbow grease — and a whisk or wooden spoon — can still result in success!

I can easily locate my wooden spoons right now, as well as the old sifters that sit “on display” in my kitchen. And there is comfort in knowing that some things don’t change and that the old ways — and those of us who know them — are still viable.