Make your own itinerary for the four-day event or check out some of the following locally owned shops and restaurants, museums and other attractions in each of the spotlighted counties this year.

The only segment of Route 66 in Kansas cuts 13.2 miles through southern Cherokee County with BKRT stops along the famous road in Baxter Springs, Riverton and Galena. Satisfy your sweet tooth at Monarch’s Pharmacy and Soda Fountain in Baxter Springs, which offers hand-dipped ice cream, malts, shakes, floats and phosphates at this old-fashioned soda fountain. Try the black cow made of chocolate syrup, root beer and vanilla ice cream or the brown cow made with cola, so named because Baxter Springs was dubbed the “First Cow Town in Kansas.”

Follow Route 66, also known as the Mother Road and the Main Street of America, west on Third Street 3.5 miles to the Marsh Arch Rainbow Bridge, the only such one remaining on the Mother Road. Completed Dec. 20, 1923, the 130-foot bridge is 20 feet wide with twin arches that rise 27 feet at its peak.

Stay on Route 66 east to Nelson’s Old Riverton Store that’s been a grocery and market since 1925 and is listed on the National Registry of Historic Places. Daily hand-crafted sandwich specials with all the fixin’s are available for takeout or eat-in at the sitting area in the enclosed entry. Top it off with a fountain drink made with extra syrup or pick from up to 15 flavors of bottled sodas in the vintage Coca-Cola cooler. Scott Nelson, owner, started working there in 1974, a year after his Aunt Isabell and Uncle Joe Eisler bought it.

“My aunt was determined not to change anything,” Joe Eisler says. And he hasn’t. Don’t miss the life-size cardboard cutouts of John Wayne and James Dean among mementos amassed over the years.

Traveling east on Route 66, you’ll discover Galena, which became a destination when the tow truck, Tow Mater, was featured in the Pixar movie “Cars.” See Tow Mater and other vintage vehicles parked at Cars on the Route, a souvenir shop housed in a restored Kan-O-Tex gas station with simulated pumps.

In the northern part of Cherokee County, Columbus and West Mineral provide unique pursuits. Visit the Columbus Museum and have your camera handy to capture a photo of the 900-pound ball of string wound by Eddie Fouts between the years of 1941 and 1957. In 1953, Fouts appeared on Garry Moore’s TV show, “I’ve Got a Secret,” with the ball of string.

At nearby West Mineral, the 160-foot-tall Big Brutus weighs 11 million pounds and is the world’s largest electric coal shovel still assembled. Visit the museum that traces Big Brutus’ role in coal mining in the area.

Stop by the courthouse in Girard to discover how the town was named and why Girard became the county seat. Hint: The deer statue on the ground’s southwest corner tells the tale.

As part of the New Deal Program, to help lift the United States out of the Great Depression, Franklin D. Roosevelt established the Civilian Conservation Corps in 1933. The CCC or C’s as it was sometimes known, allowed single men between the ages of 18 and 25 to enlist in work programs to improve America’s public lands, forests and parks. Crawford State Lake, north of Farlington, was built by the CCC between 1934 and 1939. A memorial statue of a CCC man celebrates the legacy and accomplishments of the 3.5 million young CCC men nationwide. A 1¼-mile paved path weaves through the woods with additional markers offering details about the displayed rusted remnants of equipment that the Camp of Co. 788 of the CCC used in the construction of the bridge, dam, and lake. A former rock water tower houses a CCC museum.

Coal mining in Crawford County brought many men to work in area mines. On Dec. 12, 1921, as many as 6,000 women joined men in a march to protest harsh conditions in the mines. A mural called Solidarity by Wayne Wildcat depicts this moment in history and is displayed at the Pittsburg Public Library.

If you’re a fried chicken connoisseur, then you may know that Crawford County is home of the “Chicken Wars.” Six fried chicken restaurants in the county vie for top title with Chicken Annie’s and Chicken Mary’s consistently named favorites. Less than 600 feet apart, these two restaurants inspired the best-selling fictional novel, “The Chicken Sisters.” Sample all six offerings and weigh in on your favorite pick of the chicks.

Attractions in Fort Scott can fill an entire day — or two. Start at the visitor’s center with a narrated 50-minute ride on Dolly the Trolley bumping along brick-lined streets, through Fort Scott National Cemetery, Gunn Park with its intact doll houses, and other unique sites.

Go beyond school history books at the Lowell Milken Center for Unsung Heroes downtown in the historic district. Here visitors learn how one person can create positive change under extraordinary circumstances. Follow the story of Irena Sendler, a young social worker during the Nazi occupation of Poland in World War II, who smuggled more than 2,500 Jewish children out of the Warsaw Ghetto, risking her own life. Learn about Ken Reinhardt who stood up for what he believed and befriended black students when Little Rock High School was integrated in 1957. Plan to spend time here at a place where visitors have come from 102 countries and all 50 states to discover the inspirational stories of unsung heroes.

The Gordon Parks Museum inside Fort Scott Community College follows the life and achievements of self-taught photographer, musician, writer and filmmaker Gordon Parks, one of the 20th century’s master artists. Originally from Fort Scott, Parks was the first African American photographer for Life magazine and the first African American to produce and direct major motion pictures. Buried in nearby Evergreen Cemetery, Parks’ headstone is inscribed with poems he penned called “Homecoming” and “A Sign by the Road.”

While in Fort Scott, explore the 20 restored buildings of the Fort Scott National Historic Site, a frontier fort established in 1842, which pre-dates the town.

Be sure to bring your horseshoes and try your luck in Bronson City Park, also in Bourbon County, where the first horseshoe tournament was held.

A complete list of stops are available on the Big Kansas Road Trip 2022 website, bigkansasroadtrip.com, as well as in a free booklet that’s available at area libraries and visitor centers.

As Penner says, “See you on the road!” 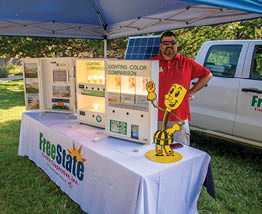 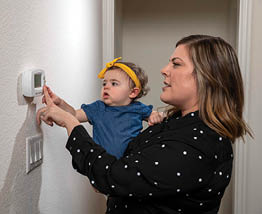