Freedom Doesn’t Exist Without Those who Answer the Call

In the spirit of the forthcoming Veterans Day on Wednesday, Nov. 11, I take this opportunity to pay tribute to America’s veterans for their devotion, patriotism, selfless service and sacrifice.

Regardless of the military branch our veterans have served — Air Force, Army, Coast Guard, Marines, Navy, Space Force — each patriot has served with honor and dignity. They have not only fought our wars, but preserved the peace, whether in faraway lands or here at home. They have lived uncommon lives under a common banner: a love of country and service to our nation.

We must also be reminded this Nov. 11, that freedom is costly and reflect upon those who stood guard, fought, bled and died for this country in places like Kandahar, Fallujah, Hue, Inchon, Iwo Jima, Normandy, Midway, Meuse, Gettysburg, Yorktown and numerous other places around the world.

Because of our veterans’ loyalty to country and great courage, America remains today — and what we’ve been for more than two centuries — the land of the free and home of the brave. A beacon of hope in an increasingly complex world.

America’s marvelous 244-year-old experiment, which the rest of the world thought would never last, endures regardless of strife and modern-day stressors. We are a country built on principles so cherished in the human heart that entire generations of our young have gone into harm’s way to ensure America’s founding ideas would always survive.

It’s important to take a step back and remember why men and women of this great nation are willing to lay down their lives to support and defend the United States of America.

Our country is the living paragon of people who had the radical and stubborn idea that the value of a human being — of every single one of you — is tied to their individual character and potential and not merely the possession of a fancy name, aristocratic title or royal blood.

Our Founding Fathers deeply believed this “extremist” idea and in a defiant message to monarchs they had the audacity to loudly proclaim that Americans should choose their own leaders, not be ruled by them.

In an act of tremendous bravery by rebelling against the British government, they signed their names to the Declaration of Independence, risking everything they had so their families and future generations could have the chance to live in a free country.

The last line of the document they signed reads: “And for the support of this Declaration, with a firm reliance on the protection of Divine Providence, we mutually pledge to each other our Lives, our Fortunes, and our sacred Honor.” After signing and understanding the gravity of their actions, John Hancock said “We must all hang together … ” to which Ben Franklin replied, “Yes, we must indeed all hang together … or most assuredly we will all hang separately.”

Veterans Day is not about war. It’s about the brave men and women who believe not only in the U.S. but in the very idea of the United States. The very idea of what our Founding Fathers risked their lives for. More than any others, our veterans have always understood that this nation is not like any other nation.

Just as America can’t survive without freedom, freedom cannot survive without American citizens who answer the call to defend our way of life. It’s why we recognize our veterans every year to show them that we will never forget their service to the nation. 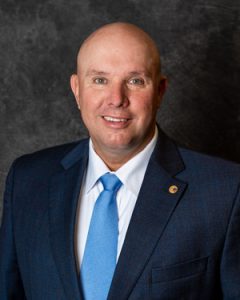 Lee Tafanelli is Chief Executive Officer of Kansas Electric Cooperatives, Inc. in Topeka. He served in the Kansas Army National Guard for more than 30 years, most recently as the state’s adjutant general, director of Kansas Homeland Security and director of Emergency Management. KEC and its member co-ops thank Lee for his dedicated service to our country.