Innovations Help Kansas and Beyond

Kansas scientists, innovators, and forward thinkers have successfully created and discovered incredible breakthroughs in medicine, natural science and geology. Some may be familiar, like George Washington Carver, others not as well known. But they all had a curiosity and intellect that led them to many important discoveries.

Although Wilhelm Conrad Roentgen first recognized a medical use for X-rays, it is Kansas resident Ed Jerman who is known for bringing the X-ray machine to the forefront of the medical community with his sales, manufacturing and training activities. 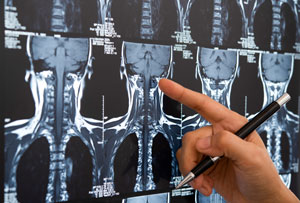 Jerman joined the Victor X-ray Company, the medical division of General Electric, in 1918. As head of the educational department, he employed individuals to serve as demonstrators and trainers. His writings served as an X-ray technician textbook. He was also co-founder of the American Society of X-ray Technicians.

Earl Sutherland received the Nobel Prize for physiology and medicine for his study of how hormones regulate body functions.

Sutherland, born in Burlingame, was serving as professor and director of the department of pharmacology at Case Western Reserve University in Cleveland when he first made the discovery that led to his Nobel Prize.

He isolated a previously unknown chemical, called cyclic AMP, and proved that it played a transitional role in many hormonal functions. He showed for the first time that hormones did not send their messages regarding digestive, reproductive, or metabolic processes directly to the target organs. It was that chemical that told the organs what to do. Further research showed cyclic AMP was also instrumental in transmitting genetic information and abnormal cell growth.

Isaac Goodnow helped in the establishment of Bluemont College and its Kansas Agricultural College. It developed into the present-day Kansas State University.

The federal government gave some 82,000 acres of land to support the college.

In 1925, President Calvin Coolidge appointed Kansas resident William Marion Jardine secretary of the United States Department of Agriculture, a position he held for four years. He was instrumental in directing a program to help farmers during the economically depressed post-World War I period.

Before Coolidge selected him for the cabinet-level position, Jardine served as dean of the School of Agriculture at Kansas State Agricultural College (Kansas State University). He became president of that institution from 1918-1925.

Following his tenure as secretary of agriculture, President Hoover appointed Jardine as ambassador to Egypt in 1930. Upon returning to this country in 1933, Gov. Alf Landon appointed him a temporary Kansas state treasurer. The following year he became the president of the University of Wichita (now Wichita State University).

George Washington Carver, born the son of slaves in 1864, was purchased by a Missouri farm couple named Carver. Moses and Susan Carver raised George and his brother James as their own. They taught the boys how to read and write.

Around age 13, George moved to Fort Scott, Kansas, attending school while supporting himself doing laundry at a local hotel. He moved several times as a young man. He attended high school in Olathe while working at a local barbershop and helping a friend, Lucy Seymour, with her laundry business. He moved to Minneapolis, Kansas, in 1880 and finished high school.

After being turned away from Highland Presbyterian College because he was Black, he homesteaded in western Ness County near the town of Beeler. He farmed there, observing, and making sketches of the local flora and fauna. Carver eventually earned a master’s degree in agricultural science from Iowa State University.

Booker T. Washington asked Carver to teach at Tuskegee Institute in Alabama in 1896 to head the African American college’s agriculture department. Carver went on to discover hundreds of uses for peanuts, soybeans and sweet potatoes. He also taught farmers about his discoveries through conferences and demonstrations.

After graduating from the University of Kansas, Wallace Pratt, a Phillipsburg resident, began working for the Kansas Geological Survey. In 1918 he joined Humble Oil & Refinery as the company’s first geologist and later Standard Oil.

Pratt helped advance the oil industry in applying geology to identify the location of oil deposits and encourage geophysical instruments.

Chip Lagerbom is best known for living in a tent in the Trans-Antarctic Mountains during the summer of 1990-1991. He went as far south as anyone can go on earth.

Attending Lyons High School and Kansas State University, Lagerbom went on to graduate studies at the University of Maine. He participated in an archaeology program and eventually signed up with the university’s glacial geology team as a field assistant.

He dug pits from which geologists would collect rock and soil samples. He witnessed the last untouched frontier on earth. He signed up for a second tour in 1992 and wrote a book about polar explorer Henry Bowers.

Since his journeys to the Antarctic, Lagerbom has kept an avid interest in the topic. He is currently teaching in Maine.

Every day Kansas’ sons, daughters and residents are making discoveries. Stay tuned. More great breakthroughs may be just around the corner.