Made (and scooped) in Kansas

Many Kansans spent more time cooking at home for the first half of the year, and some started to pay more attention to local food sources this spring with the onset of the coronavirus pandemic and stay-at-home restrictions.

“Overnight we went from milk as our sole focus to the ice cream mix really selling,” said Melissa Reed, the oldest daughter of Hildebrand Farms Dairy co-owner Alan Hildebrand. Reed is plant manager at the 150-cow dairy near Junction City, and she also oversees the on-farm store that is open five days a week.

“The ice cream mix was never something we sold in a sizeable number to individual customers. Since the pandemic started, we’ve seen a big shift in people wanting to create experiences for their families. Because they are limited in out-of-the-house experiences, they are going to the kitchen and cooking again.”

Hildebrand’s soft serve ice cream mix comes in the dairy’s signature half-gallon glass bottles, available in chocolate and vanilla from April through October. It’s a blend of milk, cream, pure cane sugar, non-fat dry milk and vanilla; two half-gallon bottles are used for a 1.5 gallon at-home ice cream machine. You can try it at the farm store, where they serve cups and cones of the soft serve.

Now that stay-at-home orders have ended, many of you will venture out this summer for a scoop, or more. Data from the International Dairy Foods Association shows the average American will eat 23 pound of ice cream this year. The ice cream you get in a Kansas scoop shop can range from commercially made to churned with a premixed base to crafted from scratch.

“Most ice cream businesses, even small ones, are making their ice cream from a prepared base,” said Kendra Burkey, who started Salted Creamery in Newton with a business partner in 2013 and is now sole proprietor. “Each of my recipes is made from scratch. It’s a whole lot more work, but it means that each flavor has its own unique character and experience.”

Salted Creamery is one of several Kansas ice cream makers who buy Hildebrand Dairy’s cream or milk to make their own base. Even more opt to buy the dairy’s custom or premade unflavored bases to then add flavors and inclusions, Reed said.

Salted Creamery is a good reminder to look for ice cream in more than just traditional scoop shops; Burkey sells directly to customers and through other businesses. Look for small-batch ice cream, gelato, custard, sorbet, sherbet and popsicles at family farms, local markets, restaurants and even mobile makers who set up at festivals and special events. 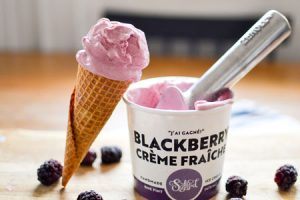 Burkey says she makes the kind of ice cream that she wants to eat: homemade recipes that use simple ingredients with additions that might be familiar but are indulgent in quality and quantity. She wants you to take a bite of her Berry Cheesecake ice cream – her most popular – and be smacked with the authentic cheesecake flavor she gets by using the same ingredients that go into cheesecake. She offers 12 core flavors and rotates in other flavors while continuing to develop new recipes and new products, including bars. Another popular flavor is Rhubarb Crisp, based on her mother’s recipe for a lightly-spiced buttery oatmeal crisp.

Making ice cream was more of a hobby for the first five years she operated Salted Creamery with a business partner. Then she became sole owner, and as demand for her ice cream grew over the past several years she slowly shifted it to her career. She left her teaching job at Hesston College early this year and converted her garage into a full-time production space. With the pandemic slowing down traffic to her main sales outlet, Prairy Market & Deli in Newton, and canceling private events she was booked for throughout the spring and summer she partnered with Grazing Plains farm to start selling pints direct to customers through dairydispatch.com (for pick up in Newton or delivery within 15 miles). You can also still buy pints from the freezer section at Prairy Market & Deli in Newton or through the Funky Fresh online farmers market in Wichita. Order scoops at The Monarch restaurant in Wichita and Ad Astra Food & Drink in Strong City, or catch watch her Facebook page for updates on new outlets or a return of her summer scoop cart on Thursday nights outside Prairy Market.

Among one of the smallest of the state’s farmstead creameries, Stevie Lord is making goat milk ice cream and selling to the public through a Facebook page under The Lords Goats. She has customers road trip to pick up ice cream regularly from Manhattan and Beatrice, Nebraska, and occasionally as far away as Salina. Her family lives on 5 acres just west of Marysville where she has chickens and 11 goats, including four she milks mainly because of lactose sensitivity among her three young children. With so much milk produced every day, she started making goat milk products.

Among her most requested is a light, creamy ice cream that she offers in vanilla, chocolate, fresh fruit flavors including cherry and strawberry and an ever-changing menu of flavors, including caramel featuring a caramel sauce made from goat milk, cookies ’n cream and coffee. She sells about 20 pints a week and regularly sells out. She also sells packages of homemade waffle cones – dipped or plain, and she makes individual waffle and cookie ice cream sandwiches and root beer float popsicles.

Rex and Shannon Rees are the third-generation to own and operate Rees Fruit Farm, where about 80 acres near Grantville on the northwest edge of Topeka are used for fruit and vegetable production. They sell their products at an on-farm market that is open daily. After developing a recipe for their popular apple cider donuts, Shannon Rees spent nearly a year creating the formula for Apple of My Ice Cream, a soft serve ice cream that tastes like having a slice of apple pie a la mode. She tried using the farm’s cider, boiling the cider into a concentrate and upwards of 100 other attempts but the apple flavor wouldn’t come through. Finally, she discovered a high quality apple flavor syrup made in France that she adds to the ice cream along with her own unique blend of seasonings. They serve it in waffle cones or cups year-round along with 3-ounce and 1.5 gallon containers already frozen and ready for takeout. Next she’s working on a bread pudding recipe.

Just north of Wichita, Elderslie Farm expanded its farm-to-table and outdoor café business with a 4,000-square-foot creamery in 2019. 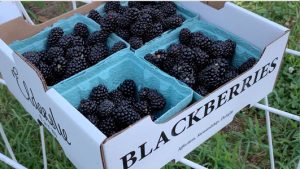 They serve gelato and sorbet four days a week throughout May, June and July, wrapping up the season not long after the U-pick blackberry season concludes. They typically have four flavors they scoop into cups; a recent menu included Sweet Cream, Bourbon Caramel, Blackberry Sorbet and Blackberry Froyo. Their gelato base is made with goat milk from their grass-fed Nubian and Saanen goats you’ll see in the pasture or cow milk from Faye Farms in Udall.

All aspects of producing ice cream at Kansas State University happen within a 16-block radius of the two campus scoop shops and are part of students’ education: genetics and breeding of the College of Agriculture’s dairy herd through milking and processing the raw milk, then producing up to 52 flavors based on the classic recipe introduced in the 1970s. Choose from a rotating selection of 16 hand-dipped flavors, including the best-selling Purple Pride (blueberries and cream) and summertime fav Leaping Lemon. The dairy processing plant is finishing up a renovation this summer; check the dairy bar’s Facebook page for reopening status. 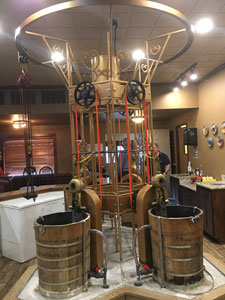 Deanna Munson of Munson Angus Farms became known as the ice cream lady after making her simple yet delicious homemade ice cream (based on her grandmother’s recipe) for fundraisers over the years. Not long after retiring from Kansas State in 2004, she took on the task of making 60 gallons of ice cream for an event, using as many home freezers as she could borrow from neighbors. When she saw a vendor at the state fair using a wagon mounted with two large ice cream freezers, she replicated the system, operating it until opening their Munson’s Prime restaurant in October 2014 in Junction City. That same year, on a trip to Silver Dollar City, the Munsons saw an even larger setup using four freezers. They had the Munson farm crew build a custom 10-foot-tall ice cream machine with intricate metalwork and pulleys turning belts. It sits in the dining room of the restaurant.

Munson said keeping the recipe simple and from scratch is the key to its popularity. The restaurant serves cups of vanilla, chocolate and strawberry, along with one specialty flavor the chef makes. 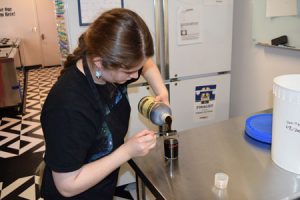 Dagney and Ken, along with their daughter Katelyn, use a blast chill method and a high butter fat content mix to make an especially creamy ice cream right in the scoop shop. They use fresh fruit and other premium ingredients and look for local flavors when possible – lavender honey ice cream made with local honey and elderberry using Wyldwood Cellars’ elderberries, for example. They have more ideas for flavor profiles than room in the case, where they typically offer about 30 dairy and non-dairy options served in cups or fresh-baked waffle cones. Among the favorites nearly always available: Speculoos, a decadent blend of cookie butter and Biscoff cookies; salted caramel banana; hot chocolate featuring milk chocolate and Tabasco; and best-selling cookie dough.

José Luis Valdez sold ice pops, or paletas, in Guerrero, Mexico, as a young boy and in 2004 wanted to bring a taste of home to the predominantly Hispanic Kansas City, Missouri, Westside community. He his wife Lucia Fonseca now have a centralized production facility in Roeland Park, Kansas, where they use traditional recipes and a slow-churn technique and an additional four shops in Kansas (Kansas City, Olathe, Wichita) where they sell their Mexican-style ice cream.

The menu has expanded beyond the original strawberry, mango and chocolate to a lineup of 50 fruit and cream based pops, from mango with chile to creamy pistachio. The shops also have rotating hand-dipped ice creams and sorbets, many using popular Latin fruits and ingredients including a new summer flavor: dragon fruit.

After first making ice cream as a teenager growing up in Chihuahua, Mexico, then working in the business in Kansas City, Rogelio Ornelas decided to start his own paleteria in western Kansas where Hispanic customers appreciate a familiar taste and others clamor for the new concept with fresh flavors. Rogelio and his wife Karina Ornelas have two shops in Garden City with production at one.

Along with milk- and water-based popsicles and ice cream, they sell fruit drinks and snacks, including homemade potato chips and corn in a cup. You’ll find about 20 flavors at a time of the bars and another 20 of the hand-dipped ice cream. Flavors range from candy to fruit and several that are Mexican specialties. A few of the more uncommon options are cantaloupe, pine nuts and strawberry cream with Nutella.