Meet at the Crossroads

When Humanities Kansas scheduled the Smithsonian’s national traveling exhibit “Crossroads: Change in Rural America” for a nearly yearlong tour through the state, organizers had no idea that by the time the exhibition opened, communities would be facing fresh decisions brought on by a global pandemic.

While the newest challenges for rural Kansas might not appear in physical displays that have been in development for more than a year, undoubtedly the situation will influence discussion during and after the project. Humanities Kansas is sponsoring the national “Crossroads” exhibition and using it as the anchor for a statewide initiative with the same name. The nonprofit works to empower Kansans to strengthen their communities and democracy. The goal is for this exhibition and associated public programming during the next 10 months to be a catalyst for conversations about our state’s future while allowing small towns to share the changes that have affected their fortunes over the past century or more.

The Smithsonian’s exhibition — featuring photographs, hands-on activities and audio and video clips — explores what happened when America’s rural population became a minority of the country’s population and the subsequent ripple effects. It’s a broad exhibit covering themes that relate to most rural places: identity, land, community, persistence and managing change.

“The exciting part is that every community in Kansas that hosts the exhibition gets an opportunity to produce a companion exhibition to tell their local story, so the experience is different in every community,” said Abigail Kaup, who is coordinating the initiative for Humanities Kansas. The nonprofit has been partnering with the Smithsonian Institution’s Museum on Main Street program to bring a national exhibit every two to three years since 2000.

“Crossroads” opened Aug. 29 in Iola and will crisscross the state, staying in six host communities for six weeks at a time before ending June 13, 2021, in Norton. About 30 towns with a population no larger than 20,000 applied for one of six slots to host the Smithsonian exhibition and to create a companion exhibit. There are 10 additional communities of all sizes called partner sites. They won’t have the traveling exhibition but they are extending the “Crossroads” theme with local exhibits, public programs and family-friendly activities.

A list of the 16 sites and details of what they are planning is posted at crossroads.humanitieskansas.org. For those not comfortable traveling to see an exhibition in person or if conditions change and force venues to close, at least a portion of the localized content will be available as a virtual tour on the website.

Sixteen sites remain on target to have exhibitions open to the public at various times over the next 10 months, with modifications to help protect visitors, staff and volunteers from the coronavirus.

Here’s a brief overview of what each of the six host communities have planned. Be sure to check the website

regularly as events will be continuously added and there could be updates to what’s listed here.

Allen County is exploring the many ways it is a geographic crossroads in southeast Kansas, from the multiple railroads that once ran through the community, to the highways running in every direction and the more recent development of bicycling and walking trails. Their companion exhibition, “Allen County: Trails to Rails to Highways and Back,” also shares how residents have responded to crossroads moments through the years.

The exhibition displays hundreds of photographs, most supplied by the Allen County Historical Society, and uses excerpts from the diary writings of a fictitious family to trace the area’s history chronologically. The first entry is in 1856 after Jeremiah Wilson relocated from New York and the last entry, in 2018, is by Judith Wilson.

The full diary, written by local historian Larry Manes, was scheduled to print as a special section in the Iola Register newspaper in the weeks leading up to the opening. There will be extra copies available at the exhibition.

Daniel Kays, executive director of Iola’s Bowlus Fine Arts Center, where “Crossroads” will be on display, said the project committee has organized panel discussions and other events, which will be promoted online. They’ve also created a day trip to extend the exhibit beyond the Bowlus’ walls. A map gives historical points of interest throughout the county that might even surprise a few locals, he said. 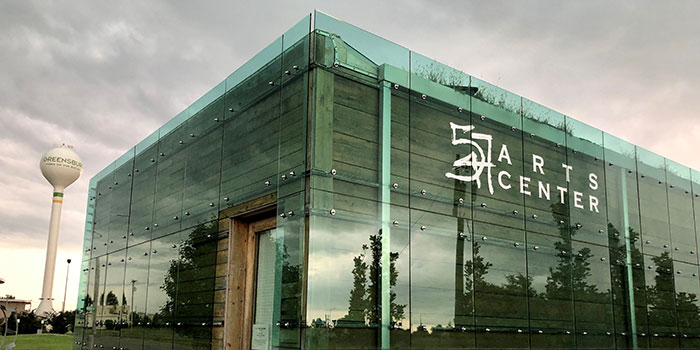 Most Kansans know the tragedy of the EF5 tornado that devastated Greensburg and surrounding areas on May 4, 2007, and the efforts to rebuild as a model of an environmentally friendly designed town. But now the western Kansas community has a different set of challenges as it continues to work on steady, sustainable growth and to support the needs of a shift from an aging population to one with young families who have relocated.

Project director Ann Dixson said the community viewed hosting “Crossroads” as a chance to dive into that and other stories of pivotal decisions past, present and future. The Smithsonian exhibition will take up all of the gallery space inside the 5.4.7 Arts Center, where Dixson is director, so the companion exhibition will be a semi-permanent outdoor installation of mosaic mural blocks created around the theme “Greensburg Crossroads: Envision, Engage, and Endeavor.”

“The theme of crossroads resonated with storylines that we already tell in our permanent exhibits here,” said David Kreider, museum technician for the Kauffman Museum at Bethel College in North Newton and project director for the “Crossroads” stop there.

The central Kansas museum explores cultural and natural history of the Central Plains, and Kreider said their companion exhibit — “Of Land and People: Our Community at the Crossroads of Change” — will focus on the people of the area who addressed pivotal moments of change, from Mennonite immigrants from Europe in the late 1800s to Mexican Americans and African Americans who came to the area with railroad expansion to more recent immigrants.

Look for a special event on Friday, Jan. 29, as the exhibition’s stopover coincides with Kansas Day.

The Independence Historical Museum and Arts Center is teaming up with the Independence Public Library to host “Crossroads.” Visit the Smithsonian exhibit at the museum, and the companion exhibit will take the form of storefront displays one block away in the town’s historic downtown.

The theme of the walking outdoor exhibit is “Independence: Include, Initiate, Innovate” and is expected to cover all 150 years of cityhood, from oil boom to innovation after the oil bust including agricultural history as well as recent entrepreneurial momentum in the southeast Kansas community.

“We applied for this exhibit because our community is truly at a crossroads,” said Brandon West, project director. “With generational shifts, we are recognizing that it is important for the survival of our community to focus on building up entrepreneurial growth and combat brain drain by attracting young professionals back to our community.”

The Volland Store is the most rural of the six sites hosting the Smithsonian exhibition and is just one example of re-imagining rural spaces for community-building in Wabaunsee County. Volland is a gallery and events center in a repurposed historic general store in Alma, a tallgrass prairie town of less than 800 residents.

The main gallery will house “Crossroads” while the local exhibit, themed “Deep Roots and New Growth in Wabaunsee County,” will include activities and exhibits at adjacent buildings, from a blacksmith shop to an artist residence. Patty Reece, one of the project directors in Alma and co-owner of the Volland Store, said plans also are being finalized for a storytelling tour of a nearby ranch and a stone wall building workshop led by a Flint Hills craftsman. Artists will gather stories from visitors during the “Crossroads” exhibit that will be used later for a community theater project.

“The local exhibit will explore real stories of real people,” Reece said. “From ranchers who choose to continue their rural lifestyle, steward the land and provide leadership for new ways to meet current challenges, and townspeople who are entrepreneurs, committed to building a community that is unique, sustainable and strong.”

On its final stop, “Crossroads” will fill the gallery space at the Gloria A. Nelson Cultural Arts Center in northwest Kansas. It is in the restored Heaton Building in Norton’s downtown historic district.

Volunteers from the Norton County Arts Council are coordinating the companion exhibition, “Breaking Ground: Tales of Norton County Fireballs.” Caryl Hale, a photographer and board president of the arts council, sees “Crossroads” as a way to build a stronger historical and cultural narrative for residents and visitors while engaging local artists.

“Artistic folks don’t always feel like they have a place in a rural community, so we wanted to use local art to share the historical figures and crossroads stories from Norton’s past,” she said.

There are three main components of the local exhibit, all built around trail-blazing personalities. One section focuses on two of the town’s pioneering women, Madame Broquet, who at one time was the largest real estate owner in Norton, and Phoebe Amelia Oliver Briggs, one of the country’s first female doctors. A local artist will create artwork featuring recipes of Briggs’ remedies, and a descendant, who is a New York-based artist, is creating a portrait for the exhibit.

Another component tells the tale of the county’s turbulent beginning, and a third explores the personalities behind the discovery of the large meteorite that famously landed in the county in the 1940s. Local students are recreating 1950s paintings of green fireballs by Leota Ray Butler LaPaz, wife of meteor expert Lincoln LaPaz.

Hale said volunteers are working on event and activity details, and they’ll encourage visitors to also stop at the nearby Norton County Museum. KCL