Rally ’Round the Food Truck 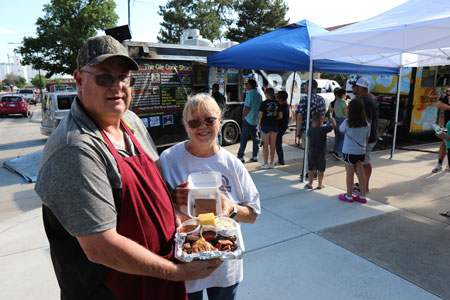 In a region where some of the earliest mobile kitchens in history once rolled, communities across the Great Plains are now enjoying the latest wave of restaurants on wheels.

Chuck wagons designed specifically for cooking date back to 1866. Rancher Charles Goodnight is credited as being the first to convert an Army surplus Studebaker wagon into a portable kitchen with areas for food prep and clean up, cooking and storage. These wagons followed trail-driving cowpokes — including those leaving Texas headed for Kansas — and are considered the most direct forerunner to our modern food trucks and food trailers.

“Food trucks add so much to our community,” said Megan Welsh, manager of the Dodge City Convention and Visitors Bureau. “They are adding in new cuisine and offering accessibility. Here in Dodge they are scattered throughout the city so you’ll most likely stumble upon one as you’re wandering around. They are vitally important to the success of our restaurant industry and they played a huge role during the pandemic.”

Already focused on to-go grub, many food trucks have reported picking up new followers while restaurant dining rooms were closed and when diners prefer to take the food to eat outdoors or at home. As more people embrace this dining concept and the number of mobile eateries continues to grow across the country and within Kansas, operators are focused on setting themselves apart. That often translates into unique dining options and new cuisine not already served by a community’s bricks-and-mortar restaurants.

Sushi fans rave about Saiko Hibachi & Sushi Japanese Express in Independence and Sumo Sushi & Hibachi in Fort Scott. Smoke n Seoul, based in Gardner, fuses Kansas City barbecue with Korean barbecue and operates throughout the Kansas City metro area. Sweets lovers will swoon over the specialty flavors of creme brulee served by the Eudora-based Torched Goodness truck or the slices of layered cheesecake and other decadent sweets at Hays’ mobile ANDBakery.

The trend is happening in cities and on ranches.

This spring Bar Mill Beef in northwest Kansas rolled out its Feed Wagon. Scott and Jessica Roesch showcase their Rawlins County ranch raised beef by preparing cheeseburgers and barbecue beef sandwiches, along with sides, at markets and events. And in northeast Kansas, John and Debbie Jenkins of Auburn haul their concession trailer Oz Food Extravaganza to events in Kansas and surrounding states where they serve food that highlights the Scottish Highland cattle they raise.

Cynthia Siriphone and Ivan Morales started Noi’s Food Truck in December 2019 in Dodge City. While Morales first wanted to go with a taco truck, the business and relationship partners decided Mexican food options were aplenty in the area. Siriphone, whose nickname is Noi or “little” in Laos, was already known for making and selling egg rolls based on her Laotian grandmother’s recipe so the pair opted to embrace Siriphone’s heritage.

They wondered if diners who hadn’t experienced Laos cuisine would give them a try, so they started with a few basic menu items that many people would be familiar with: egg rolls, shrimp rolls, chicken skewers and sticky rice. They’ve continued to add more Laos ingredients through specials. Some become popular enough they find a place on the regular menu, such as papaya salad or the spicy Laos sausage that Noi’s serves on its own or as part of a banh mi, a sandwich that already fuses Vietnamese and French cuisine.

They use Monday through Wednesday to prep each week’s food then open Noi’s noon to 10 p.m. Thursday through Saturday, or until they sell out. The truck is parked regularly at 506 Avenue B in Dodge City, a lot owned by Siriphone’s uncle. They’ve noticed regular customers coming from Jetmore, Minneola and Garden City and they’ve got plans to travel when invited to area festivals and special events. Follow their location and hours on the Noi’s Food Truck Facebook page.

Noi’s is one of about 16 food trucks the Dodge City Convention and Visitors Bureau knows is operating in the community. Some are parked at permanent locations and some move around. You’ll find a list of the trucks at the bottom of the bureau’s restaurants webpage at visitdodgecity.org/456/Restaurants, from Provecho, which serves a fusion of Mexican and barbecue that its Mexican-American owners call “Mex-Kan” food, to Chu My’s Food Truck, an expansion of a well-established bricks-and-mortar restaurant serving authentic Vietnamese food.

Siriphone said Dodge City doesn’t have an ongoing event meant to gather its food trucks in one spot, but she said Noi’s and other trucks participate in annual community events such as the Main Street Festival that happened in early May.

Liberal also doesn’t have a rally-type event for its food trucks because most are stationary. Locals know where to find them, and visitors seem to figure it out through word-of-mouth despite the operators not being overly active on Facebook.

Sally Fuller, tourism and convention director at the Liberal Tourism & Convention Bureau, believes there are about a dozen food trucks positioned around the city in southwest Kansas, with menus ranging from hamburgers to barbecue, though the majority serve Mexican. While the cuisine is predominantly Mexican, each truck has a different focus and recipes based on what they grew up eating and learning to cook at home.

The bureau plans to include information on the trucks on its new website, but until then information can be found on a local resident’s taco truck review page on Facebook. Search for La Super Lonchera to see a series of videos Nathan Smith started making and posting earlier this year.

“I am not Guy Fieri and this is definitely not ‘Diners, Drive-Ins and Dives,’ but I truly enjoy the amazing Mexican food trucks in Liberal,” Smith posted on the page, referencing the Food Network program. So far he’s taken viewers into the mobile kitchens of Las Delicias, known for its gorditas, and TACOntento, whose chef-owner specializes in tortas, Mexican sandwiches served on soft bread and filled with meat and toppings that feature seasonings and recipes unique to his family and his native Mexico City.

Smith also has a how-to video explaining the ordering process at a food truck in Liberal, where most trucks are open daily and have car service rather than having diners come to the truck window for their order.

One of the southwest Kansas communities that has created a thriving food truck gathering or rally is Garden City.

Garden City Downtown Vision has organized First Friday Food Trucks for several years, inviting local and visiting mobile eateries to gather at Stephens Park the first Friday of each summer month, May through September. You can grab lunch or dinner, or both, as the trucks operate 11 a.m. to 7 p.m. Remaining 2021 dates are July 2, Aug. 6 and Sept. 3.

Melissa Gallegos, director of the organization that promotes Garden City’s central business district, said the event launched a few years ago with just a couple of trucks and now it’s routinely at full capacity with 13 participating trucks, though there’s room for diners to spread out throughout the park once they’ve purchased food.

Expect a handful of regulars who participate each month alongside new trucks that bring in additional unique flavors and menu items. Local trucks were joined at the June event by three trucks from the Kansas City area and others from eastern Colorado and nearby western Kansas communities.

Some months, the First Friday get-together coincides with other special events. In June, there was also a historic walking tour at 7 p.m., and the food trucks stayed an extra day to be a part of the community’s Beef Empire Days events on Saturday. Watch the group’s Facebook page (facebook.com/downtowngc) for a list of which trucks are participating and other activities being offered.

Among the local trucks at June’s First Friday rally was Pinky’s Grilled Cheestro, a food trailer “bistro” owned and operated by Candice and Jose Rodriguez. The husband and wife duo started their mobile food adventure in 2009 by using all the money they had to purchase a mobile unit from a Boy Scout group as a way to make up for lost income when Jose’s oil field job was lost during the recession. They opened in 2010 while based in Ashland and started by serving Mexican food.

The small community of less than 1,000 people supported the trailer, along with regional events, and they also had success when they operated it in North Dakota where they moved for another oil field job.

The food truck scene in western Kansas continued to grow while they were gone, though, so when it was time to move back to the state in 2015, they decided to change their concept to offer food that would allow them to stand out. When they moved from Ashland to Garden City, where they both had spent most of their childhoods, they counted about 25 Mexican restaurants and found nobody in the state focused on grilled cheese.

A grilled cheese sandwich and mac and cheese concept allows them to experiment and have fun with the food they serve.

“Almost anything can go on bread and then if you add cheese, it’s even better,” Candice said.

They’ve built a loyal following through social media and their longevity. They even know of fans from Wichita and cities in Colorado who make a stop at Pinky’s part of any road trip through the western part of Kansas.

In January 2020, the couple opened a bricks-and-mortar restaurant with the same name. During the pandemic they mostly served from the restaurant, closing the dining room when necessary and offering takeout and delivery. They are running both again, opening the restaurant every day but Sunday and taking the trailer out to special events all summer and fall.

At the restaurant, they’ve become known for the twisted Christo sandwich, their artisan twist on a classic Monte Christo. Having a full kitchen allows them to offer a larger menu at the restaurant and to offer specials, including Saturday brunch options.

“We don’t have deep fryers and we make everything from scratch, including all of our sides,” Candice said.

A recent menu at the food trailer led off with one of their best-sellers: a brisket grilled cheese made with smoked brisket, house barbecue sauce, Havarti cheese and beer braised onions sandwiched between two slices of Texas toast. Another popular dish is the carne asada mac, a shell macaroni in green chili cheese sauce topped with ribeye, shrimp, avocado, pico de gallo and ghost pepper creama.

The menu continues to evolve, she said, as they get inspired by food shows on television and how their customers respond to the specials they create. The couples’ grown children work in the business along with other family members.