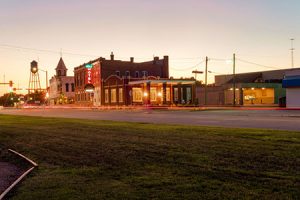 If you enter the main lobby of The Historic Wolf Hotel in Ellinwood, Kansas, just in time for their period-style lunch, you may be escorted into the Sunflower Room and seated at a table with one seat reserved for Bernard Millit. To clarify, Millit died by suicide with a pistol in 1927 in the very place occupied by the Sunflower Room, so his presence at the table is marked by his suit jacket and train ticket stub. The bullet hole from that fateful day can be seen in the ceiling, and framed newspaper articles describing the event decorate the dining room walls.

The life of The Historic Wolf Hotel has been intriguing to say the least, and current owner Chris McCord has added his special touch to the space. McCord was born and raised in Ellinwood and like any small-town kid, he wanted to leave and find adventure far away. But before he knew it, the town’s history and charm won him over. When he turned 26, he bought the building and began restoring it to the original hotel’s splendor.

McCord has taken care to showcase as many historical elements and stories as possible, and the experience is completely immersive, with thought being put into the tiniest of details. On the dinner tables, advertisements for businesses long gone sit among the array of sunflowers. Wheat shafts and sunflowers designed when the dining room was originally constructed in 1923 accent the pressed tin ceiling.

Even the menu takes you to a simpler time. Fried chicken with crunchy old-fashioned breading, bacon macaroni and cheese dripping with real cheese, peppery creamed corn, and mashed potatoes with gravy. This homestyle meal follows freshly baked bread and butter, and a colorful salad topped with homemade croutons.

“We plan every month around the third Sunday to come in and have chicken,” said diners Brad and Sarah Shirer from Great Bend, Kansas. “We always feel so welcome. The owner is just always so outgoing and friendly.” Even receiving the bill is an experience as it’s tucked into the pages of an old “The Adventures of Tom Sawyer” book filled with notes from satisfied customers.

When Ellinwood was first founded, the mostly German Protestant townspeople made use of space above and below ground, digging tunnels throughout the town to connect businesses. The tunnels were lined with wooden boardwalk planks and large stones, and storefronts were built into the walls. “There were stairwells through our sidewalks that led you to an additional level of stores,” explained McCord. “You could go to the train station, you could go to the mill, you could go to the brewery — all below ground.”

Over the years the storefronts changed, and at various times, people have even sought refuge within the tunnels. During World War II, a strong anti-German movement spread throughout the surrounding towns and some of Ellinwood’s citizens were forced to hide in the tunnels for their own safety. According to the National Register of Historic Places, “Refuge under the Wolf Hotel building was particularly popular, because it was accessible to food and other services.”

One of the storefronts that currently sits below the Wolf Hotel is the Drummer’s Room, which acted as a wholesale store when the trains rumbled into town in the 1890s. Today, the low-lit store displays vintage dresses, dolls, toy trains, and knickknacks, but nothing is currently for sale. According to paranormal investigators, this part of the tunnels has the most energy and activity. The hotel staff decided early on to make an effort to not disrupt any of the resident ghosts. “That’s the reason our group has done no restoration in this store,” McCord said.

There was also a point during this train town’s history when at least 11 different drinking establishments bustled below ground. To keep in theme with history, what was once the Sunflower Sample Room, which an early 1900s advertisement boasted had “a fresh keg always on tap,” is now a recreated Prohibition-style bar that serves “giggle water” on Friday and Saturday nights. This modern-day speakeasy serves 1920s classics such as Old-Fashioneds, Sidecars, the Bee’s Knees made with local honey (the owner’s favorite), and anything gin-based since that was the easiest alcohol to produce at the time. The bar’s signature drink is Sally’s Hard Cherry Limeade, named affectionately for Miss Sally, the mannequin who has stood watch over the building for the last 50 years. “She’s the face of the place. Really, she owns the place,” McCord chuckled.

Between the Drummer’s Room and the bar, visitors can view artifacts from the first Ellinwood Public Library, including library cards dating back to the early 1940s displayed along the walls, highlighting some of Ellinwood’s more literary folk. The library was first constructed in the tunnels and prior to its establishment, the Sunflower Sample Room had fallen by the wayside following the stringent rules of Prohibition. The original library extended through two stores, but according to McCord, the current library tour is of the space once inhabited by the children’s section.

Years ago, the city filled in the majority of the tunnels, except for the section under the Wolf Hotel and a small portion under The Ellinwood Emporium across the street. The storefronts under the emporium are available to tour and contain a blacksmith shop, a barber shop and a bathhouse. When taking the guided tours, guests should allot for 90 minutes to view all six storefronts between the two buildings. During summer, the $12 ticket includes a tour of the Ellinwood Historical Museum.

Depending on the time of year, visitors can listen to a live band while sipping their Sidecar during the hotel’s “Tunes in the Tunnels” program, or reserve tickets to take part in a murder mystery dinner. Quarterly, the hotel hosts a comedian in the space that used to house the Bank of Ellinwood (the main vault door is still intact), and the next comedy show will take place during the town’s After Harvest Festival in July. Check out the hotel’s webpage and social media for upcoming events.

Whether you crave old-fashioned fried chicken and potatoes on Sundays, jump at the chance for a spooky ghost hunt, enjoy having a few cocktails with friends, or just want to get away for the weekend, adventure awaits at The Historic Wolf Hotel.