The United States celebrates its 245th anniversary this month. Our country is a mere 24.5 decades old. We are a relatively young country by world standards, but we have accomplished important firsts. Arguably, the most important was to be the first nation to be established on the premise that sovereignty rests with its citizens and not its government. More simply put: Who Rules? The Declaration of Independence asserts that the governments derive just powers “from the consent of the governed.” President Abraham Lincoln famously referred to sovereignty as “government of the people, by the people, for the people.”

President Lincoln’s message was delivered during the dedication and consecration of the Soldier’s National Cemetery in Gettysburg, Pennsylvania, in 1863. His words honored the soldiers who sacrificed their lives during the Civil War, however, his timeless message applies to the countless Americans who have died for the cause of democracy in the following 150-plus years. Lincoln asked every generation to continue the work of previous generations to ensure that those who died for our freedom did not die in vain, and that the living honor the wartime dead by fighting for the ideals our soldiers gave their lives for.

Governments of the people and for the people are successful only when “by the people” is engaged and informed. Are you fully engaged?

Sovereignty works only when citizens engage. Governments of the people and for the people are successful only when “by the people” is engaged and informed. Are you fully engaged? Are you informed of the issues facing your local community, or our state or the nation?

In the weeks leading up to the Kansas primaries on Aug. 2, and the general election on Nov. 8, all eligible voters have a duty to not only register to vote, but also learn about the issues and then cast their ballot. I could offer myriad reasons why all eligible Americans should vote, but let us consider the most poignant, from my perspective: From the founding of our nation to the present, more than 1.1 million Americans have been killed in all U.S. wars to preserve American sovereignty and American freedoms. Chances are someone in your lineage served in the military and/or sacrificed their life for this country. Think about the young men and women from your community who currently serve to protect our freedoms.

What is at stake? National, state, and most importantly — local representation. On the national level we will be voting for one U.S. senator and four U.S. representatives. At the state level, Kansans will be choosing their governor and lieutenant governor, secretary of state, attorney general, state treasurer, commissioner of insurance, 125 state representatives, and the state board of education in Districts 1, 3, 5, 7 and 9. In our courts, we will be casting ballots for supreme court justices, court of appeals judges, district court judges and district magistrate judges. 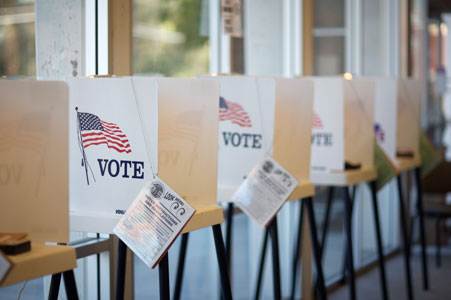 Contrary to some opinions, your vote does matter and strongly influences decisions at the local and state level. Elections have and will continue to be decided by a single vote:

Voting is a right, a privilege and a responsibility. American soldiers fought and died for our sovereignty. Voting honors their ultimate sacrifice.

If you are not registered to vote, you have until July 12 to do so. I encourage you to visit www.sos.ks.gov/elections/voter-information.html for voter registration information.