Electric cooperative members across the country are increasingly satisfied with the performance of their electric co-ops, and more than ever before see them as trusted sources for information on keeping their energy costs low. These are among the key findings of a recent national survey commissioned by the National Rural Electric Cooperative Association (NRECA), the national trade association representing more than 900 electric cooperatives, and conducted by Frederick Polls.

The survey found increased satisfaction over 2018 numbers from respondents who say their electric co-op keeps them informed about its actions (84%) and is a trusted source for information about energy use and devices, including solar energy (83%). It also recorded an increase from 2018 in co-op members who say their electric co-op is a partner in understanding energy technologies and controlling energy costs (83%).

“We hear a lot of stories about how Americans are losing faith in institutions like big companies and government, but that’s clearly not the case with electric cooperatives,” says NRECA Communications Senior Vice President Scott Peterson. “The positive view that members have of electric co-ops is a testament to their reputation as honest brokers and entities who truly care about their communities.”

A telephone survey, which has been conducted annually for the past six years, polled 750 co-op members in mid-July 2019. It has a margin of error of 3.6%. 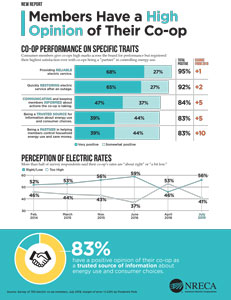 More than half (56%) of the co-op members who responded said their electric bills are “about right” or “a bit low” versus 41% who say their bills are “too high.”

Electric co-ops care about the local communities they serve and want to be the trusted energy source for their members. If you have questions about your energy use or ways you can make your home more efficient to save money on your energy bills, contact your electric co-op — they’re ready to help.